Fume hoods are part of the complex laboratory ventilation system that keeps staff safe from chemical exposure. Maintaining these important lab fixtures can be a challenge. Evaluating fume hood performance through third-party contractors can be time-intensive and costly, leading to lost research time. The National Renewable Energy Laboratory (NREL) began a safety project to perform in-house evaluations of all of its on-site fume hoods. The project successfully verified the safety performance of all NREL fume hoods with minimal interruption of valuable research time, yielding significant cost savings and a process improvement that is still in place several years later.

NREL Environmental Health and Safety (EHS) staff sought to test all fume hoods to ASHRAE Standard 110-2016 levels and reduce the hood face velocity to the lowest safe level of 80 feet per minute. ASHRAE Standard 110, "Method of Testing Performance of Laboratory Fume Hoods," is a procedure for testing the containment performance of fume hoods as installed. Historically, operations staff would work with EHS staff to employ third-party contractors to perform ASHRAE 110 testing of fume hoods across all NREL lab facilities. Although this process had previously been adequate, third-party contractors were costly and tests achieved inconsistent results across the nearly 120 fume hoods on the NREL campus. Furthermore, the tests resulted in significant downtime in research spaces. The NREL team decided to take a different approach, training staff on the testing procedures and purchasing two carts with testing equipment to be able to perform in-house testing. 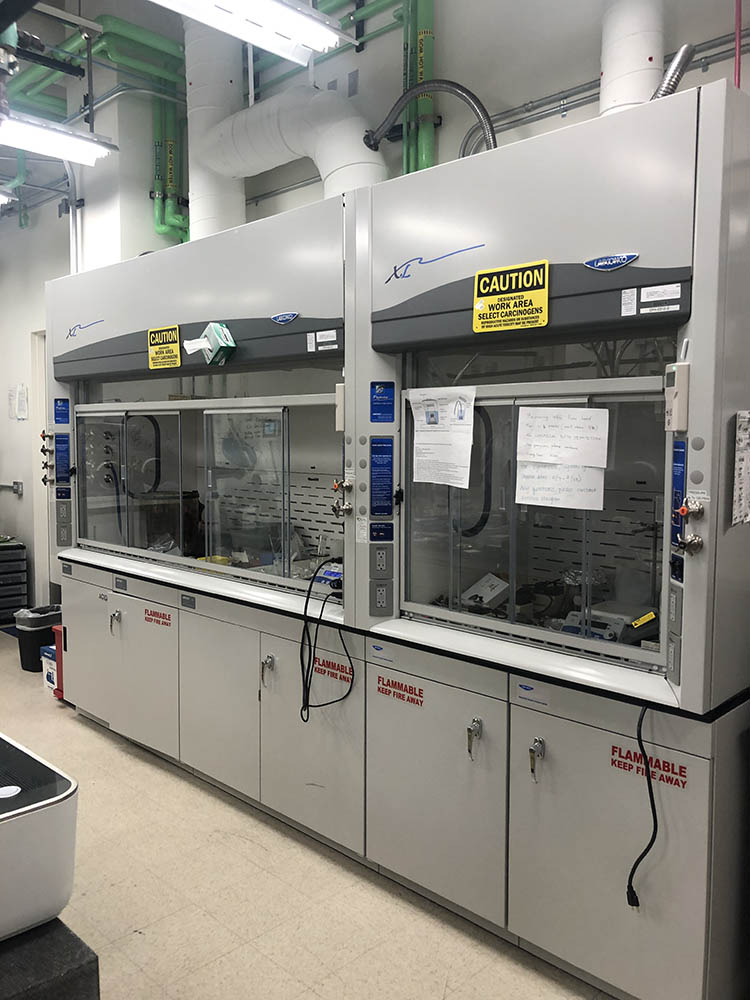 The 2016 ASHRAE standard consists of three tests: flow visualization, face velocity measurements, and tracer gas containment. Each fume hood test takes about four hours in the lab. With the organization's own staff completing the testing, it was easy to navigate around research schedules. The process ensures consistent and effective testing.

Benefits to completing testing by in-house staff include:

The in-house testing has also allowed staff to keep detailed records and documentation from previous tests, so that if there is an issue with a fume hood, the operations staff have records showing the previous test as needed.

"For how many hoods we have, there is nothing negative with [the in-housing testing process]," said In Shames Stevens, NREL chief mechanical systems engineer. "We know it is done right, per our safety protocols and standards."

Ready to test your own fume hoods? Follow these steps: