As a nationally recognized leader in science education, Emory University has hundreds of laboratories across their campus. To help integrate sustainable best practices into laboratory operations and management, Emory established a Green Labs program. Through this program, individual labs can receive different levels of certification and earn recognition for making sustainable choices.

Beyond the Green Labs program, Emory's engineering team continuously looks for opportunities to implement best practices in current and future labs. One best practice is the deployment of occupancy sensors. For a laboratory setting, occupancy sensors can help control ventilation and lighting. Adequate laboratory ventilation is crucial towards providing a safe and comfortable environment while mitigating exposure to hazardous contaminants.

Emory is in Atlanta, Georgia where energy rates are very affordable when compared with the rest of the country. However, Atlanta’s climate tends to require more energy to treat outside air than the rest of the country. When operated correctly, occupancy sensors can not only save energy but, if tied into the HVAC they can save on heating and cooling as well. In the example above Emory was able to only do three quarters of the labs in the building. Emory is running the air changes at 6 occupied and 2 unoccupied with estimated yearly savings slightly over $50,000/yr.

There are multiple considerations to occupancy sensor placement and number. While lighting can be controlled by a bench in a large lab, the HVAC (heating, ventilation, and air conditioning) cannot. It is crucial to determine lab boundaries based off the HVAC pressure boundaries as well as the width of the occupancy sensor's beam and range. For their pilot, Emory chose a 5-year-old building that was not performing as expected despite being new and having undergone commissioning. The building's original construction had dual-technology sensors as loosely depicted in figure 1. The orange triangles help show the sensor's direction, range, and spread.

Working with the manufacturer, staff discovered that air noise from the lab was being picked by the sensor's ultrasonic function, making the sensor stay on indefinitely. Even with the sensor's sensitivity at the lowest setting, the unit would not switch to unoccupied. To solve this issue, the sensors were reprogrammed, removing the ultrasonic feature and adding in new detection timeframes. In figure 2, you can see the various sensor testing that occurred over the course of several months.

The next issue that Emory had to address was the range for each occupancy sensor. Since the sensors were within the maximum detection range, Emory looked at the installation angle. When installing a sensor, it is critical to get the detection angle correct so that it can accurately detect occupancy levels within the projected coverage range. Based on Emory's experience, they noticed that for the sensor to adequately detect a researcher's movement, you need to be well within two thirds of the beam range and spread.

Each sensor's settings were set to high sensitivity and to remain on for 30-minutes after the last recorded movement. It is important to be mindful about how often you are calibrating these sensors. The loss of confidence in the occupants during the calibration and false positives can lead to them or your Environmental Health and Safety Office requesting them to be removed.

Finally, to compound issues, the deluxe model was using AI program to try and determine when someone was just walking through and turning the lights on/off quicker than the programmed on/off times. This caused lights to flicker off at inopportune times when the researchers were working. Unfortunately, the AI program could not be removed from Emory's model.

Emory's solution was to again work directly with the manufacturer to replace the existing bench sensors and add additional ones per Figure 3. The new sensors were all PIR without AI, set to the highest sensitivity and 30 min on times. 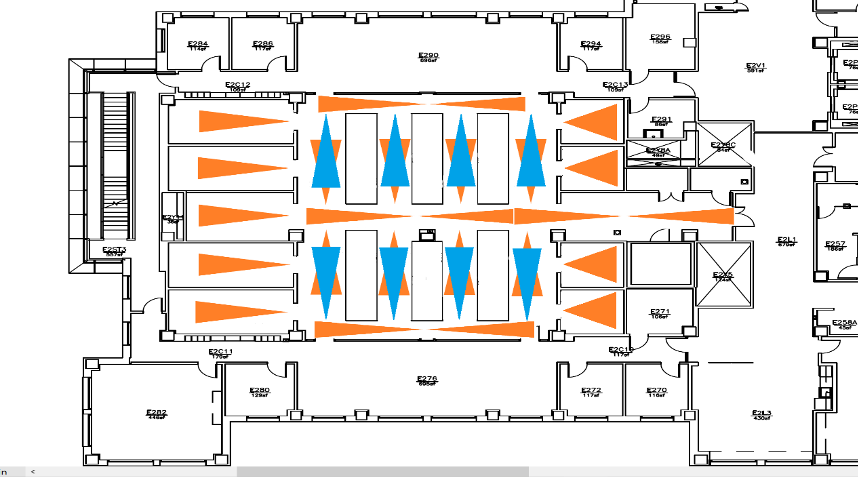 With this setup, Emory has all but eliminated the false positive and negative detections. In the week shown in figure 4 you can see that there are still a few false detections occurring. Some of these have been confirmed to be the cleaning crew or repairs but some are still a mystery. Emory suspects it to be the heat generated from some lab equipment such as ultra-low freezers, glasswashers or autoclaves.

During this learning process, Emory recommends the following: